For those who want to escape from the claustrophobic hustle and bustle of Jakarta for a while, a visit to the natural splendor of Garut regency in West Java, about six-hour’s drive from Jakarta via the Cileunyi toll road, may be the solution to soothe stressed-out city dwellers.

Garut city, the regency’s capital, is a small town situated on the road between Bandung and Tasikmalaya, famous for its dodol (sticky rice cake) and leather products.

However, the prime attractions in the region are not in the city but in the remote areas that are occasionally difficult to reach.

One thing Jakartans will notice about Garut is its abundant and clean water supply. ome small restaurants and lodgings that I visited surprisingly had clean water on tap in their restrooms.

About 27 kilometers down an undulating, curving road from Garut city is the Curug Orog waterfall, located in the Cikajang subdistrict at the foot of Mount Papandayan.

The waterfall is nestled by tea plantations. Visitors access the waters by descending 200 meters down cement steps.

From a distance, the Curug Orog looked beautiful as we could see the river of water breaking over the hill, about 250 meters high. Near the falls there is a small pool, about a meter in depth, whose waters flow from a freshwater spring.

As I approached the waterfall I was disappointed to see garbage left by careless visitors, mainly cans and plastic packaging. There were no trash bins or litter warnings posted around the area, either.

Despite my disappointment, however, the Curug Orog offered cool air and good views after the exhausting bus trip from Jakarta.

Garut regency is also known for its several active volcanoes. One of them is Kawah Kamojang, which is situated on the border between the Bandung and Garut regencies.

It is about 25 kilometers to the north east of Garut city in the direction of a small town called Samarang. 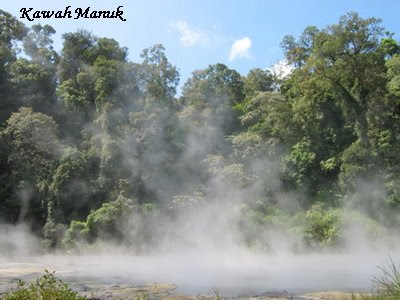 Before reaching the geothermal area, we drove through a small town where the workers of the Kamojang plant are quartered, passing by the big pipes of the plant’s station.

Then we turned onto a dark, cobbled road that led to the site. The only light came from our car, as there were no street lights. Perhaps due to its challenging access, even on the weekend there were few travelers.

The roughly one-kilometer-square geothermal area consists of craters such as fumaroles (openings in the Earth that emit hot steam or gas), hot lakes and bubbling mud pools.

The must see crater for visitors is Kawah Kereta Api. The 60-meter-deep well was first explored by the Dutch in 1928.

When a park caretaker inserted a long bamboo pole into the crater, the escaping gas generated a hissing sound like the steam train.

He placed an empty plastic water bottle over the end of the pole, and we watched as the 140-degree Celsius steam quickly blew it off.

Visitors usually stay for a while in Kawah Hujan to bask in the sauna-like steam that is believed to cure skin diseases.

The next crater, Kawah Hujan, consists of fumaroles that emit sulfur gas and steam from the ground.

Visitors usually stay for a while in Kawah Hujan to bask in the sauna-like steam that is believed to cure skin diseases.

After leaving the crater, we arrived at a warm water stream — perfect for plunging your feet into — that flows from a hot sulfuric spring.

There are other hot lakes and mud pools in the park, but many are fenced off to keep adventurous visitors from getting too close, like Kawah Manuk (Bird Crater) which generates smoke and the high-pitched noises that give it its name.

I felt a mystical sensation when I saw the clouds rising from the pool amid the chilly air.

In the parking lot of the geothermal area there are several rooms with baths and natural running warm water.

However, they are simply constructed and unlit by lamps, so if you are inside after dark, you must navigate by touch.

But Garut is not only full of natural attractions. Cangkuang Temple, about 17 km from Garut city in Leles subdistrict, is worth a visit as well. 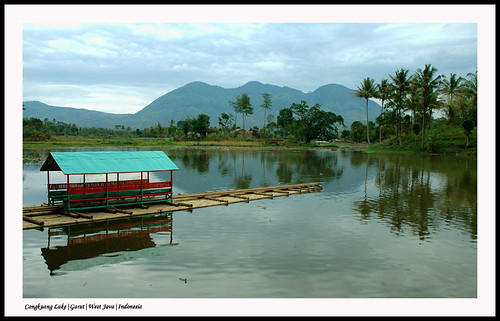 The temple is located on a 16.5-hectare island on Cangkuang Lake. Visitors have to take a bamboo raft to reach the temple.

On a clear morning, the view from the lake is spectacular, as it is surrounded by mountains rising in the distance.

This Hindu temple is a reconstruction of the original temple that was first discovered in 1966 by an Indonesian archeological team.

The original date of its construction is not yet known.

The temple, standing on a small hill, is about three meters from the grave of Arif Muhammad, a preacher of Islam from the Mataram Kingdom in the 17th century.

He built six houses for his daughters and they still stand on the island in a hamlet called Kampung Pulo. Those who live in the houses are descendants of Arif.

According to tradition, the bamboo stalk houses can only be inherited by women. Despite being Muslim, the residents here have not forgotten Hindu rituals.

On my way back home to Jakarta’s concrete, steel and smog-filled skyline, I felt energized after contemplating the diversity of natural beauty and historical richness that Garut offers from just a short distance away.