Long known as feminine and demure, Indonesia’s traditional kebaya is headed for a makeover at the hands of innovative designers.

Growing demand for stylish yet still modest fashions in the world’s most populous Islamic nation is helping power efforts to bring Islamic fashion into the modern age, a movement symbolised by changes to the iconic kebaya, a blouse-dress combination.

Fun prints, intricate detailing, colours so bold as to be psychedelic and a mix of delicate lace all graced the catwalk at the recent Jakarta Fashion Week. One designer even paired the kebaya with red-and-yellow striped tights.

“You can definitely expect to see more Islamic fashion in the future and it is for everybody. If you’re not a woman who wears Islamic clothing you can still wear it.”

Though Islamic clothing is not mandatory throughout much of this vast nation, many women struggle with the desire to be both fashionable but dress in line with Islamic principles that rule against showing hair or skin.

In a nod to local mores, U.S. First Lady Michelle Obama donned a headscarf on her visit to Jakarta’s Istiqlal mosque earlier this month. But wearing the headscarf is not mandatory and regulations concerning clothing are fairly liberal save for Indonesia’s West Aceh district, which is the sole upholder of sharia — or Islamic — law.

Yet despite coming across as “sexy” to some due to its tight fit and use of see-through materials, the kebaya has managed to escape censure even from Islamist groups such as the Prosperous Justice Party (PKS), who criticized the wives of the president and vice-president last year for not wearing headscarves prior to the presidential elections.

For those in the industry, allowing the kebaya to be reinvented paves the way for designers who want to introduce modern designs into Muslim style clothing. 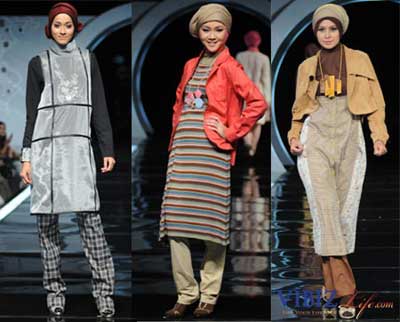 “If you look at the scene five years ago, women didn’t have choices. But now, it’s growing, and we have many designers who design Muslim wear,” said designer Lenny Agustin, who is known for her eclectic style.

“Fashion is a big business and our population is very big. By focusing on local fashion that would cater to the local population, it is a big opportunity,” she said.

Homemaker Tuttiyah, 55, who wore a long, full-sleeved blue tunic-style blouse with black three-quarter pants, said she doesn’t feel torn between style and modesty because there are so many choices available. She wears a headscarf outside her home.

“Those who prefer the traditional version can still buy and wear that, whereas those who want to keep up with modern times can buy and wear the modern ones,” she said.