This is what I got from answer. com when I googled ”Habibie”:

An aeronautical engineer who became Indonesia’s minister of technical development and eventually its president, B.J. Habibie (born 1936) was a lifelong devotee of Indonesian dictator Suharto. When student riots and economic turmoil forced Suharto from office, he named Habibie as his successor.

Bacharuddin Jusuf Habibie (BJ Habibie) was born on June 25, 1936 in the sleepy seaside town of Pare Pare in the Indonesian state of South Sulawesi. The fourth of eight children, he was nicknamed “Rudy” at an early age. His father, Alwi Abdul Jalil Habibie, was a government agricultural official who promoted the cultivation of cloves and peanuts. His father was a muslim leader. Habibie, means MY LOVE in Arabic.

As a child Habibie liked swimming, reading, singing, riding his father’s racehorses, and building model airplanes. In 1950, when Rudy was 13, his father suffered a heart attack and died. Suharto, then a young military officer billeted across the street, was present at his father’s deathbed and became Habibie’s protector and substitute father. Habibie later wrote of Suharto: “I regarded him as an idol, who could serve as an example for all people … a young, taciturn brigade commander, with great humane feelings, and a fierce fighting spirit.” Suharto’s autobiography said Habibie “regards me as his own parent. He always asks for my guidance and takes down notes on philosophy.”

Habibie’s interest in building model planes continued while he excelled in science and mathematics at the Bandung Institute of Technology. His mother, R.A. Tuti Marini Habibie, arranged for him to continue his studies in Germany. At the Technische Hochschule of Aachen, Habibie studied aircraft construction engineering.

In 1962, on a visit home to Indonesia, he married H. Hasri Ainun Besari, a doctor. They had two children, Ilham Akbar and Thareq Kemal, both born in Germany. While Habibie was abroad, Suharto, who had become a general, succeeded General Sukarno as Indonesia’s ruler in 1966.

After graduating with a doctoral degree from the Aachen Institute in 1965, Habibie joined the aircraft manufacturing firm Messerschmitt-Boelkow-Bluhm, rising to the rank of vice-president. As a research scientist and aeronautical engineer, he helped design several planes, including the DO-31, an innovative vertical takeoff and landing craft. He specialized in solutions for aircraft cracking, gaining the nickname “Mr. Crack” as one of the first scientists to calculate the dynamics of random crack propagation. He also became involved in international aircraft marketing activities and NATO’s defense and economic development.

In 1974, Suharto asked Habibie to return to Indonesia to help establish an industrial base. Habibie jump-started an aircraft construction industry and a state airline company. Soon he became Suharto’s chief advisor for high-technology development. Habibie exploited the relationships he had developed in Germany and NATO to engineer a myriad of controversial deals involving aircraft, ships, heavy industry, and economic development.

As minister of research and technology, Habibie promoted the importation of high-tech goods and services. He liked to leapfrog over low-skill industries and move straight into high-tech ventures, spurning the basic development which might have brought needed employment to Indonesia’s low-skilled masses. Habibie spent billions on his strategic companies. His pet project was a national airplane, the propeller-driven N-250. Its producer was IPTN (Industri Pesawat Terbang Nusantara – Archipelagic Aircraft Industry), a state company whose vice-president was Habibie’s son.

A small, wiry man, Habibie enjoyed classical music, motorcycle riding and swimming in his pool at his home on Jalan Cibubur. A devout Muslim, he founded the Indonesian Association of Muslim Intellectuals in 1990. 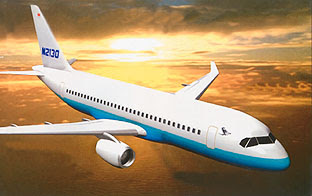 Commercial airplace N-2130, the production is on hold

He worked under President Suharto for 20 years, first as minister of state for research and technology where he oversaw the attempted development of an Indonesian aircraft industry, and later as vice president. In May 1998, Suharto resigned, handing the reins over to Habibie. In 1999 he lost a parliamentary vote of confidence and he withdrew from the presidential race. Right now, he is living in Germany.
Mr. Habibie, we miss you.