Why is Indonesia so in love with the Blackberry? 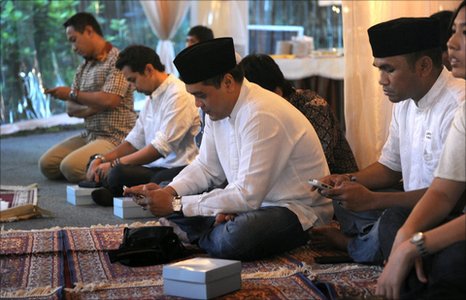 Some of Indonesia’s three million Blackberry owners use their smartphones to pass the time until they can break their Islamic Ramadan fast.

As the joke in Indonesia goes, if you don’t have the right gadget you may end up a social outcast.

Undoubtedly, the gadget of the moment is the Blackberry smartphone.

A walk through a packed food court at lunchtime in Jakarta proves the point. Most patrons are glued to their smartphones, available in a myriad of colours but covered nonetheless in decorative cases.

Incessant message alerts reverberate around the food hall amid the clatter of cutlery.

But it is not just professionals like Purbo who are caught up in the hype. High school students like 14-year-old Haryo Suryo Susilo are also using them to stay in touch with their friends.

When Haryo meets us in a hotel lobby in Jogjakarta, he has been playing on his white smartphone for half an hour, ignoring the fruit platter in front of him. 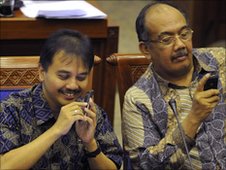 A certain smartphone is also popular with members of parliament

“I’ve only had it three months and I love it,” he says. His visibly annoyed mother, Sari Susilo, says he spends all his time on his new device.

Haryo’s mother is a smartphone user herself and it is clear his love for his prize piece of technology runs in the family. His father even uses two smartphones to keep his supermarket business running and stay in touch with his family.

But why smartphones, rather than mobile phones? Because they’re so much cooler, says Sari.

Despite this, there are high-profile marketing campaigns, most notably featuring the president’s daughter-in-law.

Marketing analysts say it is word of mouth that drives smartphone sales in Indonesia but how this all began is a mystery.

The market leader’s features are little different to those of other smartphones available, although users can message each other for free. Somehow this lifestyle product has gained cult status in Indonesia.

“We are a nation of consumers, always on the lookout for the latest trends,” says Purbo.

“When I first got a Blackberry in 2008, very few people in Jakarta used them.

Over the last two years, Prabowo has changed his smartphone four times to keep up with the latest trends.

The phenomenon is similar to the explosion of mobile phones in Indonesia less than a decade ago, making it one of the biggest mobile phone markets in the world.

“You were not cool unless you had the latest Nokia. We’re heading in the same direction now,” says Prabowo.

The DJ describes himself and his friends as ‘new freaks’.

“Some people really don’t know how to use any Blackberry features apart from its messaging service. It is new and hip, and that’s it.” 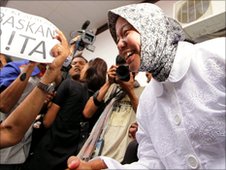 Prita Mulyasari was acquitted of defamation after social media backing
The explosion of smartphone users seems to have coincided with a surge in social media enthusiasts.

According to the Internet World Stats website, since 2000 internet usage in Indonesia has grown by 1500 per cent.

The importance of social networking came to Indonesia’s attention in 2009, when Prita Mulyasari, an Indonesian bank worker, was jailed for defamation after complaining about hospital treatment in an e-mail to friends.

Her supporters launched enormous Facebook and Twitter campaigns, sparking widespread national and international media coverage, and she was later acquitted of all charges.

More recently, Indonesian President Susilo Bambang Yudhoyono used an address to the nation to denounce critics he claims are spreading lies and rumours about him using social media.

The president even cited Blackberry as a platform that can “improve life” but added that those who “use online media to assassinate character or abuse anyone are irresponsible, ignoble and cowardly.’

While US President Barack Obama may be known to be a long-time Blackberry addict, President Yudhoyono is surely the first head of state to mention its impact in an address to the nation.

The next big thing?

Google launched its Android mobile operating system in Indonesia last year
Internet guru Purbo believes there are many Indonesians who use communication technology for more than just updating their social status.

“This is what needs to be nurtured and the government should have something to do with it,” he says.

For years, the Indonesian government has been negotiating with Research In Motion over regulations that require the Canadian company to build a local server.

Purbo believes the government needs to be more pro-active in pushing Research In Motion to invest in Indonesia.

“Why stop at one server? It’s a small piece of equipment and can be put anywhere. Why not ask them to build a factory here?

“Indonesian programmers should be getting involved and sharing some of the profit.”

All this could change if Google’s Android system, which Purbo describes as “the next big thing” takes over the market.

Android smartphones are yet to win over the Indonesian consumer.

Purbo believes this is because they are largely manufactured in Asia, so are unappealing to Indonesians craving American or European goods.

But with millions of Blackberry users putting pressure on mobile networks, Indonesian providers are having a hard time supplying a reliable service.

“I ditched my Blackberry long ago and use the Android system now, ” laughs Purbo.

“It’s cheap and made in China.”

“Some of my friends are using Android already. Others might soon have to catch up,” he says with a knowing grin.

Whatever the future holds for smartphone fans in Indonesia, it is clear this is one trendsetter who won’t be ending up a social outcast.

Akhyari - who has posted 756 posts on Good News From Indonesia.