The Best of Indonesia in Java

Java, Indonesia for centuries is the center of cultural, political, and economic activities of the entire archipelago. The main port is Tanjungpriok, which accounts for much of the country’s domestic and international shipping firms. Witness Indonesia’s cultural heritage by visiting Yogyakarta ans Surakarta – the cultural centers of Java – where you can likewise find souvenirs to take home like teak, native coffee, tobacco, batik, masks, puppets, woodcarving, jewelry, ethnic clothing and sarongs, paintings, ceramics, and basket wares.

Java, Indonesia is largely a Muslim region but Chinese and Arab communities also exist. The chief language is Bahasa Indonesia and around 250 dialects. Bahasa English, however, is understood by locals working in tourist spots. You can read national newspapers that are written in English like Indonesia Times, Indonesia Observer, and Jakarta Post.

On the other hand, it is the most urbanized island in the archipelago of Indonesia, exhibiting that of an Asian society’s characteristics of fast transition; Java Indonesia has great wealth, attractive open country, serene rural scenes, as well as a fair share of equal squalor, smutty cities, and streets throttled with traffic. Nevertheless, travelers still find Java Indonesia a very interesting place to be, where they can rebound from a simple village life to an MTV-like lifestyle on this gorgeous island.

A great deal of Java Indonesia’s previous kingdoms still remains to be the reminders of the country’s colorful history, like the well-known Hindu Prambanan and Buddhist Borobudur temples. Undeniably, the culture of Java and even its language has been strongly influenced by the languages and cultures of Indian subcontinent.

The island has also become a dominant player in the nation’s economic and political life, and its political supremacy has resulted in umbrage on the part of several residents of its neighboring islands; it was even once recommended by an Indonesian author named Pramoedya Ananta Toer that the capital be transferred to an island outside of Java to free Indonesian nationalist movement of its Java-centric nature. 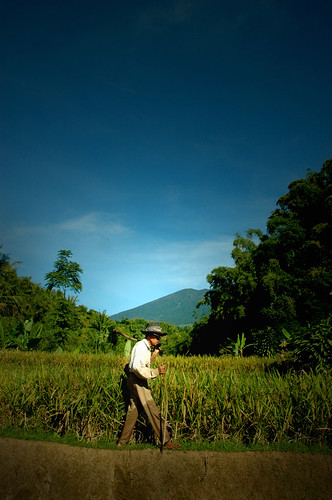 There are three main languages spoken in Java, namely Madurese, Sundarese, and Javanese; other Java tongues spoken include Tenggarese and Osing, Betawi, Balinese, Kangeanese, and Badui, as well as a large majority of its population speaking Indonesian, usually as a second lingo.

The majority of Javanese, which is about ninety percent, are Muslims, broadly ranging between santri and abangan. There are also small Hindu communes scattered all through Java, but a large population of Hindu can be found on the eastern coast nearest to Bali, particularly in the city of Banyuwangi. Java has always been a melting pot of cultures and religions, which has built a wide assortment of religious beliefs.

Overall, Java Indonesia owes much of its appealing character to its vibrant history, blend of cultures, beautiful island, and friendly people that makes it an absolutely remarkable place to experience.

Akhyari - who has written 741 posts on Good News From Indonesia.