Choosing the best stadiums in Asia is no easy task. There are literally hundreds of amazing arenas. Still, Goal.com Asia went ahead to choose the ten best.

Some of them are in for atmosphere, some for their sheer beauty and some just because of a certain something…

Not well-liked by all, this is an unusual stadium. It is a bit of mish-mash and strangely shaped but in a nation of state-of-the art World Cup arenas, it has real character. It evokes memories of England. It is found through a maze of back-streets from the station, can be heard long before it can be seen and is situated on the edge of a pleasant park. The atmosphere in no way rivals the likes of the Azadi but it is friendly and welcoming. It’s just a great place to enjoy a game.

There are some stadiums where you know where you are just by looking around. The King Fahd (pictured) has a fantastic middle-eastern atmosphere and, for a first time visitor, a lovely exotic feeling. The place can be seen from miles around with its distinctive roof easily recognizable and looks just as good up close at it does from a distance.

The venue for the 2002 World Cup opening match and one semi-final, Sangam is a futuristic beauty. Despite its capacity of 64,000, it has the feel of a much smaller ground and the sightlines are second to none, wherever you sit you get a great view. The atmosphere, especially when Korea have a big game and the Red Devils are in full voice, is also one of the best.

‘The Upton Park of Asia’. If we are talking night matches, there is. like West Ham’s home, perhaps no better place to watch football under the floodlights than at the Yuva Bharati Krirangan – better known as Salt Lake Stadium. This is a stadium and atmosphere that really hits all the senses –especially when over 100,000 come to watch the local derby between Mohun Bagan and East Bengal.

There are a whole host of venues in Japan that are contenders to be on the list. Oita has a great shout but of all the World Cup arenas, this is the one that is regularly filled to the rafters by the famous Urawa fans. The atmosphere created by 60,000 home fans roaring their team on in such a beautiful setting is definitely one of Asia’s best.

A beautiful and brand new stadium. Only a running track prevents this from being truly amazing. The design is simple, elegant and boasts a semi-transparent roof. Full of sweeping curves and rising out of the desert, the Middle East needs more of these.

Jeju is famed for three things – wind, stones and women. This beautiful island off the southern coast of Korea should also be known for its stunning World Cup Stadium. There can’t be a more picturesque setting for a stadium in the world with the Pacific Ocean glistening behind and Korea’s biggest mountain in front. You could stand there all day just looking in admiration…

Shanghai’s Hongkou has a real feel of a football stadium but it is hard to ignore an arena that is as state-of-the-art as they come. It may have been built as an Olympic arena but it will be used for football games. Already an icon, you can still see hordes of tourists charging around the place on any Beijing afternoon. 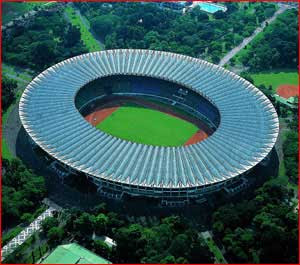 Built by the Russians, loved by the locals and praised by many visitors, the Gelora is another place that just oozes atmosphere. It, and the fans, were the star of the 2007 Asian Cup just as much as Iraq. Ok, the floodlights may go out once in a while but a full Gelora Bung Karno is not for the faint-hearted.

The Azadi is not just a stadium it’s an attitude. When Javad Nekounam warned Park Ji-sung that he has never experienced anything like the Azadi atmosphere, he wasn’t joking. If Asia had a team and a must-win game, you would want it played in this imposing arena in the shadow of the Alborz Mountains. 100,000 men produce an atmosphere that has to be felt to be believed.

Do you agree with these selections? Which stadium do you think deserves to be on the list? Please leave your comments below…