Ujung Kulon National Park is the very first park in Indonesia that is inaugurated as national park and later on it is recognised by UNESCO as World Heritage of Nature in 1991. This national park is located in the westernmost part of Java Island. Covering Krakatau and several small islands surrounding it such as Handeuleum Island and Peucang Island, this park has an area of about 1,206 km2, in which 443 km2 of it is sea. At first, the land where this park is now located was an agricultural area which eventually destroyed and the population were diminished because of Krakatau eruption on August 27, 1883. This event causes this area back to forest. 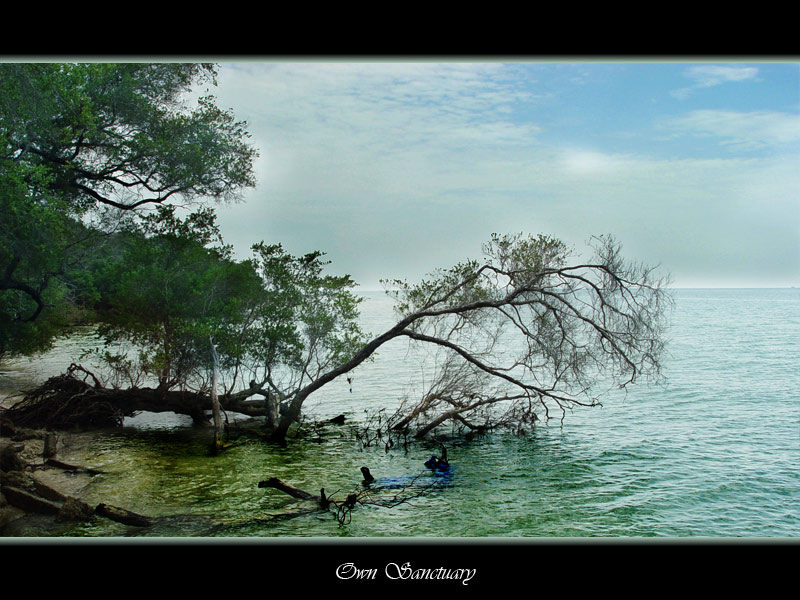 Komodo National Park received the recognition from UNESCO in 1991. The park is located between Sumbawa and Flores and it consists of three major islands, namely Komodo Island, Rinca Island, Padar Island, and also several small islands. This park was established in 1980 to protect komodo and their habitat. In addition to komodo, there are 277 species of other animals which are coming from Asia and Australia. Also, there are 253 species of coral reefs in the water area which is known as one of the best diving place. At the moment, this national park is nominated to be one of the seven wonders of the world. 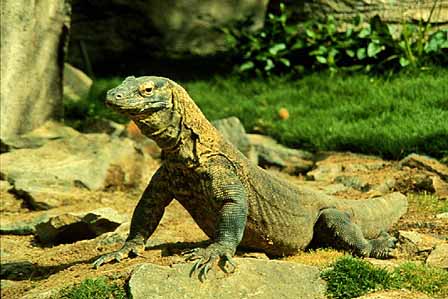 More information about komodo and its national park can be read in an English article here.

Loretz National Park, West Papua, is recognised by UNESCO in 1999. With an area of 25,000 km2, this national park is the largest one in Southeast Asia. It is also one of three places in the world which has glaciers in tropical area. This park has amazing biodiversity. There are approximately 630 species of birds and 123 species of mammals that have been identified in this park. Bird species two species of cassowary, four megapoda, 31 species of pigeon/dove, 30 species of parrot, 13 species of kingfisher, 29 species of sunbirds, and 20 endemic species such as long-tailed bird of paradise (Paradigalla caruneulata) and snow quail (Anurophasis monorthonyx). Mammals recorded include long snout thorn pig (Zaglossus bruijinii), short snout thorn pig (Tachyglossus aculeatus), four species of polecat, wallaby, wild cat, and tree kangaroo.

Tropical Rainforest Heritage of Sumatera which consists of three national parks was recognized by UNESCO in 2004.

Gunung Leuser National Park (TNGL) is one of nature conservation area which administratively located in two provinces, namely Nanggroe Aceh Darussalam and North Sumatera. TNGL includes native ecosystems from coast to high mountains covered by dense forest, a typical of tropical rain. In this TNGL area, there are rare plants such as giant umbrella leaf (Johannesteijsmannia altifrons), raflesia (Rafflesia atjehensis and R. micropylora) and Rhizanthes zippelnii which is the largest flower with a diameter of 1.5 meter. In addition, there is a unique plant which is fig or strangler plant.

Meanwhile, Kerinci Seblat National Park is the largest national park in Sumatera. This park lies on four provinces, namely West Sumatera, Jambi, Bengkulu, and South Sumatera. This park consists of Bukit Barisan, which is the highest plateau in Sumatera, hot springs, rushing rivers, caves, highest waterfalls and caldera in Southeast Asia, Mount Tujuh. This national park also has a diverse flora and fauna. About 4000 species of plants grow in the national park area including the largest flower in the world, Rafflesia arnoldi, and the tallest flower in the world, Titan Arum. Fauna in the national park includes Sumatran Tiger, Sumatran Rhinoceros, Sumatran Elephant, Clouded Leopard, Malayan Tapir, Sun Bear and about 370 species of birds.

Bukit Barisan Selatan National Park is located on administrative region of West Lampung and Tanggamus where both of them are part of Lampung Province. This park is very rich in biodiversity and is home to three species of the most endangered mammals in the world: the Sumatran elephant (less than 2000 survive today), Sumateran rhinoceros (total of global population of about 300 and is diminishing drastically) and Sumateran tiger (total of global population of about 400). This park is listed on Global 200 Ecoregions, which is a list of ecoregions identified by the World Wildlife Fund (WWF) as priorities for conservation. According to the WWF, an ecoregion is defined as a “relatively large unit of land or water containing a characteristic set of natural communities that share a large majority of their species, dynamics, and environmental conditions (Dinerstein et al. 1995, TNC 1997).” This park is highlighted as a priority area for Sumatran rhinoceros conservation through Asian Rhino and Elephant Action Strategy (AREAS) program of WWF. In addition, IUCN, WCS and WWF have identified Bukit Barisan Selatan National Park as a Tiger Conservation Unit (Wikramanayake, et al., 1997), the most important forest for tiger conservation in the world. Finally, in 2002, UNESCO has chosen this area to be nominated as World Heritage Cluster Mountainous Area along with Gunung Leuser National Park and Kerinci Seblat National Park.

Indonesia has three World Heritage of Culture objects. Those objects are:

Borobudur temple is recognized by UNESCO in 1991. It is a Buddhist temple located in Magelang, Central Java. This temple was built by Mahayana Buddhist circa 800’s AD in the reign of Syailendra dynasty. This temple when viewed from above forms the structure of Mandala, the symbol of the universe in Buddhist cosmology. Borobudur temple does not use cement at all in its construction. Instead, it used interlock system like Lego blocks that can be attached without glue. 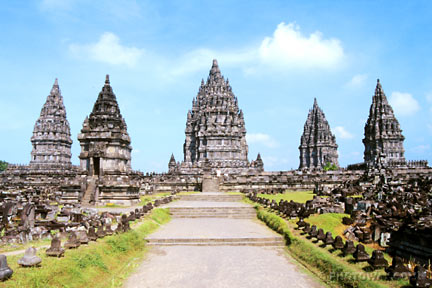 Prambanan temple is recognized by UNESCO in 1991. It is the largest block of Hindu temple in Indonesia. Located 17 km from Yogyakarta, this temple was built in the 10th century during the reign of two kings, namely Rakai Pikatan and Rakai Balitung. This temple block has three main temples in its primary yard, namely Wisnu temple, Brahma temple, and Siwa temple. All these temples are the symbol of Trimurti in Hindu belief.

Sangiran site is recognized by UNESCO in 1996. It is an archeological site located in Central Java, administratively located in Sragen and Karanganyar districts. Initially research found that Sangiran is a dome called Sangiran Dome. The top of the dome is then opened through the process of erosion so that it forms a depression. In this depression we may find a soil layer that contains information about life in the past. In this site, we could find lots of information about the remains of past life. In addition, there is complete information about the history of early human life with all things surrounds them; living place, life pattern, animals that lived with them, and the process of landform within a period of not less than 2 million years ago.

In this category, Indonesia has four objects:

It is an Indonesian traditional art which is mainly developed in Java and Bali. Sunan Kali Jaga and Raden Patah are instrumental in developing wayang. Wali in Java has organized wayang in such a way into three parts. First, Wayang Kulit in East Java. Second, Wayang Wong or Wayang Orang in Central Java. Third, Wayang Golek in West Java. They are very depending on each other: “Where is the content (Wayang Wong) and where is the skin (Wayang Kulit) must be sought (Wayang Golek)”. Wayang show has been recognized by UNESCO on 7 November 2003 as amazing cultural work in Masterpiece of Oral and Intangible Heritage of Humanity category.

Nowadays, wayang is not only in the form of wayang kulit and wayang orang, there is also e-wayang in which its developing process employs digital facilities. E-wayang can be viewed at http://e-wayang.org/

Keris is recognized by UNESCO in 2005. Keris that we know now is the result of long evolutionary process. Modern keris known today is a unique belati penusuk with a variety of forms. Besides being used as a weapon, keris is also often considered to have sueprnatural power. This weapon is often mentioned in many traditional legends such as keris Mpu Gandring in the legend of Kend Arok and Ken Dedes.

Batik is recognized as World Heritage by UNESCO in 2009. To celebrate it, Indonesia has set 2 October as batik day. Indonesian batik has various motives depending on regions. More information about batik can be read in this article. 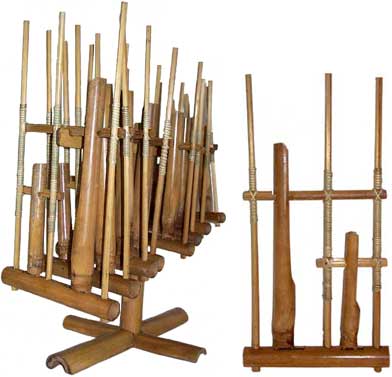 Angklung is planned to gain recognition from UNESCO on this coming 18 November. This bamboo musical instrument that produces very beautiful sound is well known overseas. More information about the history of angklung and its development can be read on this article or this.