Bringing back past glories


I must admit, I was a bit taken aback to find that a “cigarette museum” was on the list of places my guide wanted to show me in Surabaya. I’m not a smoker and I don’t like being around it, but the guide assured me I would like the museum so I went along for the ride. 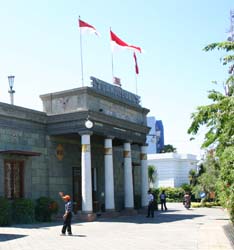 The grand facade of the House of Sampoerna Museum in Surabaya

Despite its common name, the House of Sampoerna Museum as it’s properly called is actually devoted almost entirely to the history of Sampoerna, one of Indonesia’s largest companies and of course primarily involved in the production of cigarettes. It’s a classic “rags to riches” story revolving around the company’s founder Liem Seeng Tee. The orphan Tee started out selling snacks on trains as a young boy. After saving up enough money for a bicycle, he used it to go into the charcoal business. Eventually he founded Sampoerna, which was recently purchased by international tobacco giant Philip Morris for a staggering 5.2 Billion dollars.

When you first enter the museum, you’re hit not with the smell of tobacco, but the aroma of cloves. The main product of Sampoerna is the uniquely Indonesian kretek cigarettes, made from a blend of tobacco and cloves. The museum displays various memorabilia from the company’s past, such as the push-carts originally used to sell products, old printing presses and even that old bicycle that got Mister Tee his start in the charcoal business. 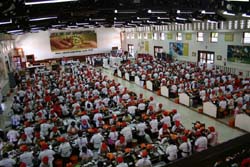 The view from the second floor of the museum, out to the factory where cigarettes are still made by hand

Curiously, the old factory building which houses the museum actually started out as an orphanage built in 1858. There are three long buildings which must have originally been dormitories as part of the complex. In between the three factory buildings are two small structures. When Sampoerna acquired the compound in 1932, the smaller buildings were used as the family homes, and one of them continues to serve that purpose to this day. The other house is now a cafe and gallery.

The building that now serves as the museum was surplus to requirements when Sampoerna first purchased the factory, and so was turned into a theater. Charlie Chaplin performed there some time in 1932, and it was here that the future president Sukarno made speeches in 1932. The museum is laid out over two floors. The first floor is a series of galleries covering the history of the family, the company and memorabilia from the company’s early days.

The second floor holds a surprise. On reaching the top of the stairs, you’re faced with a large glass wall that looks out over a still functioning factory where the House of Sampoerna still makes its premium cigarettes by hand. The scene is a little bit surreal, as the hundreds of ladies’ hands move faster than the eye can follow. A small area of the second floor allows you to see a smaller group of ladies work close-up as they roll, clip and box cigarettes at the rate of about 4,000 per person per day.

The museum is open every day. Admission is free.

For more information, you can visit the museum’s web site at www.houseofsamperna.com.