GNFI got the honor to present what we had received earlier from the one who initiate the ‘underwater temple’ project in Pemuteran Water in Bali. We have posted about this earlier thinking that it might be a phenomeal “underwater temple” discovery.

You might be the first to read. You will also see how they did the beautiful work.

I am Chris Brown, an Australian expat living for the last 18 years in Pemuteran, Bali. Over the last few days I have seen the media reports etc about the “finding of an underwater temple in Bali” and subsequent reactions. Unfortunately, I had been away for a few days and unreachable whilst this is happening and only yesterday was able to meet with some of the media to give a better explanation.

Attached please find 2 press releases, one written by Cody Shwaiko in early 2006 about the initial projects, and another, written by myself, yesterday, in an endeavour to give the real story and reasons behind the building of the “Underwater Temple Garden”, Reef Gardeners of Pemuteran, and some of the other concerned projects that we have been fortunate to be able to help the local people achieve. There are some photos ( approved for use by the photographers ) of the structure being built as well as some showing the growth of the corals on the statues etc, taken in 2008.

I hope that this helps you and puts at ease any sort of feeling that the Underwater Temple Garden was done as a publicity stunt or “just a fun thing to do” as stated by another source here in Pemuteran. 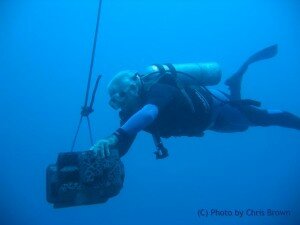 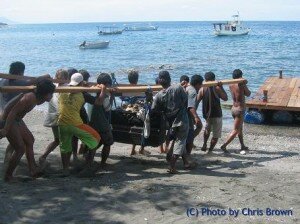 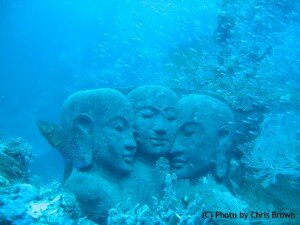 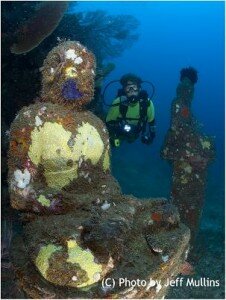 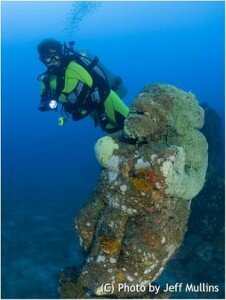 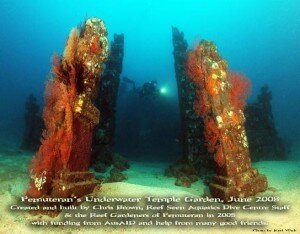 In regards to the recent media reports of an ancient temple being found in the waters of Bali Straits, I would like to clarify and expand on the subject,

The “Underwater Temple Garden” was built in 2005 as part of the “Reef Gardeners’ of Pemuteran (Tukang Kebun Laut) program, a series of projects, funded by AusAID and designed and co-ordinated by myself, Chris Brown, with the assistance of my staff and friends. The main aim of the program was to help increase employment and recovery in the area, after the effects of the Bali Bombs, both in the short term and longer term.

Unlike reported elsewhere, it was not done as “a fun thing” but as part of a overall plan to increase the number of divesites in the Pemuteran area and decrease the impact of the increasing number of divers on the natural reefs. However, even though it was a lot of hard work, it was fun doing it.

Paul M Turley, was at that time employed as a dive instructor at Reef Seen Aquatics, (Sea Rovers did not exist until 2008, and assisted the projects with coordinating the promotional material and helping to manage the day

to day activities at Reef Seen, allowing myself and the other local dive staff more time to be involved with the projects. Thank you, Paul.

All the projects were done in co-ordination (cooperation??) with the Village authorities (Kepala Desa), the local fishermen, (Neyelan), fisheries dept (Perikinan) and other relevant local authorities. The local Adat was also involved with the Temple Garden project to ensure that no religious guidelines were broken in creating this dive site. Appropriate ceremonies (Mencaru, Melaspas ) were performed before commencement and after completion of all the projects.

Pemuteran was a very dry, poor and neglected area in North Bali. When I first came here in the early ‘90’s, almost every day I could see 50 or more boats on the outer reefs, along with numerous local divers on the shore reefs, using potassium cyanide, axes and nets etc to collect the colourful reef fish for aquarium use. Not to mention several boats utilizing dynamite to catch fish for consumption. Most of these fishermen, as well as the local villagers, were unaware of the huge damage that they were inflicting on the reefs and fish population of the area for a little short term profit. I was invited to Pemuteran by Pak Agung Prana, to set up scuba dive operations here and be a ‘pioneer’ with him to protect and develop Pemuteran in a totally new concept. Slow development of tourism, along with an emphasis on employing and educating the local villagers, meant that we were able to lay the foundations for the local villagers to get the benefits and profit from their hard work and patience in protecting and repairing the marine assets (coral reefs) of the area. Agung Prana worked more in the Balinese spiritual manner, dealing with, and helping the villagers realize the areas potential, whilst I was able to use my experience and skills to show and educate the fishermen the needs and methods to protect the reefs, not just for myself, or themselves, but for all our generations to come.

They are now seeing the benefits of the many years of work in a variety of ways; lots of them and their children being employed in the local tourism, service and building works involved; also with the improving conditions of the reefs. With no potassium cynanide and dynamite anymore, there are now better reefs resulting in more fish and so, much better results using traditional and safer fishing methods. All the time understanding that that we can never rest on our laurels, but must maintain the process of continually protecting and maintaining the areas assets. Our aim was, and still is, to help the local people enjoy and benefit from what the area’s marine assets offer and what we all are doing to protect them. Not just for the businesses, but for all the villagers. Without the help of the local fishermen and villagers, none of this would have been possible so we must always remember, respect and help them to share in the prosperity.

Another major goal of ours was that we could become an example for other areas/villages to follow. It is important that the local villagers are the main benefactors of all of our/their work. Foreign and domestic owned businesses coming into the area must ensure that a high majority of their staff are from the village. We must help locally owned businesses to operate in a proper and safe manner, all to ensure that the economy of the area can develop not just in tourism but also with education, nutrition and other businesses without over developing the area and potentially destroying it for the future. We must understand why tourists travel such a long way to enjoy Pemuteran and so keep the charm of the area, not ruin it by over development and exploitation.

In regards to this, I would like to take this chance to thank the majority of other dive companies here in Bali, who understand what we are trying, and succeeding, to do. By sending guests who wish to dive the Pemuteran area to any of the locally based dive operators here, they show their respect and understanding of what we are doing.

We also help them, by sending divers who wish to dive the other areas of Bali, to the operators of these areas in return.