The Palace of The Lost City


All around Southern Africa they are to be found: the scattered sandstone remnants of ancient African cities, once the hearts of the great trading empires built on gold and ivory. Inspired by these lost empires, The Palace of the Lost City at Sun City has been created in a hidden valley in the mysterious Pilanesberg Mountains.

Here, life moves with the rhythms of the ancient continent, while new African nobility take their ease amid sumptuous luxury. At the Palace, you will encounter the Africa of today, and hear the echoes of an Africa long past. 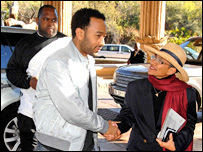 So, why am i writing this? Because, this beautiful resort was designed and developed by an Indonesian, named Herliani.


5 Responses → “The Palace of The Lost City”
1 Trackbacks For This Post
Click here to cancel reply.
Leave a Reply → reedSodyCoart