Garuda Indonesia was named the winner of the World’s Most Improved Airline Award at the 2010 World Airline Awards, that took place in Hamburg.

Commenting on the World’s Most Improved Airline Award won by Garuda Indonesia, Skytrax Chairman, Mr. Edward Plaisted said, “This was a very competitive category in the 2010 Awards, and our sincere congratulations go to Garuda Indonesia on their success. It is clear that a real process of transformation has become well progressed at Garuda Indonesia, and aside from new aircraft and new onboard products, it was improvements in onboard service that were most frequently commented upon by survey respondents.” 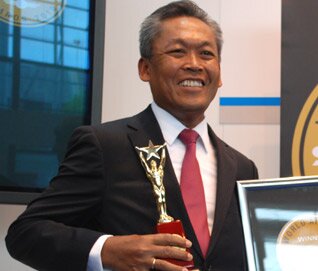 Mr. Agus Priyanto - EVP of Garuda Indonesia, collects the Award for the World's Most Improved Airlines

The runners-up in this Award category also received acclaim from Skytrax, with Hainan Airlines another airline where survey respondents specifically highlighted the standards of onboard service. Oman Air in 3rd place was commended for the product transformation that customers felt worthy of nomination.

Warning: Unknown: Failed to write session data (files). Please verify that the current setting of session.save_path is correct (/var/lib/php/session) in Unknown on line 0