Where The Dead Lie


The island of Bali is generally thought of as an island full of life. When and where death does encroach, it often becomes a spectacle of cremations and elaborate ceremonies.

One small part of Bali however upholds an unusual and apparently quite ancient tradition pertaining to death.

Sitting at the edge of Lake Batur in Northern Bali is a small cemetery known as Trunyan, where people from the nearby village of Kuban “bring” their dead to rest on top of the ground.

This unusual practice has become something of a macabre tourist attraction. Perhaps it is not really an “attraction” but a place that pricks peoples’ curiosity. The local people, though, have clearly become used to tourists coming to this site and so haggling and near constant pestering for “donations” has to be dealt with.

One can only reach this site by boat, a small fleet of which awaits visitors at the end of a wooden jetty where the stunning Mount Batur looks on.

Crossing the lake to Trunyan takes between 20 and 30 minutes and upon arrival a small huddle of men awaits any arriving boats.

The cemetery is small and there is little need or sign of maintenance. Although this is the final resting place for a number of people, a sense of respect for the dead does seem to be in short supply here.

Human skulls are lined up on stonewall shelves, which makes for a quite eerie sight to begin with but then the men here will invite visitors to pick a skull up and presumably pose for a photo; all of the visitors to this site on this occasion were quite quick to decline this invitation.

The views across the lake to Mount Batur are quite stunning and despite the annoying attendants, this is a peaceful place.

In this final resting place, the bodies of the deceased are just covered in cloth and rudimentary bamboo cages. These cages are flimsy and practically leave the body out in the open to the elements.

This creates an obvious concern; dead bodies left out in the open will of course decompose and the potential for unwelcome odors and even health concerns is real. However here, apparently, the presence of a banyan tree, described as holy, has warded off such concerns.

The huge banyan tree seems to stand as a guarding and protective figure of this cemetery. Its leafs carpet the ground around the gravesite and presumably this is part of the way in which the tree keeps the area free from unwelcome odors and so on. 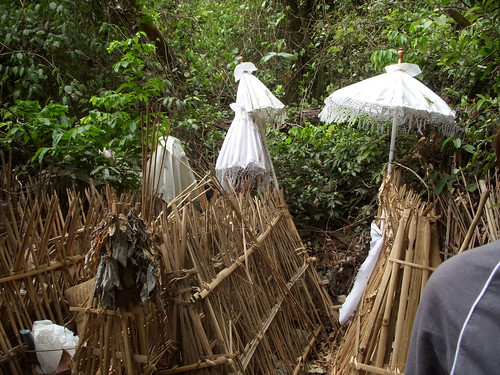 Even with the hassle and haggling from the people that wait and wander about the cemetery, this is still a peaceful place that enjoys beautiful and powerful scenery. The lake dazzles in the Balinese sunlight and Mount Batur watches somewhat broodingly in the distance.

Returning across the lake local people are traveling by boat to the cemetery, it seems to pay their respects to the dead. They smile and wave as their boat glides on by; they seem to realize what a pleasant part of the world they live in and may rest in peace in one day.


One Response → “Where The Dead Lie”
1 Trackbacks For This Post
Click here to cancel reply.
Leave a Reply