Australia is always associated with Kangaroo, even they have more animals to be associated with. Kangaroo is very rare and ‘weird’ kind of animal, with a pocket at its tummy to carry along its babies, in addition to its 2 hands and movement by jumping instead of running. Not so many people know that Indonesia also has Kangaroo, and it is an Indonesian origin.

It is a good evidence to prove that looooong time ago, a big land today called Australia was integrated with Papua, Nusa Tenggara, and other small islands in Eastern Indonesia.

Theoretically, all land in the world once said to be in one mainland before the next rising sea water separates it into several continents, even into small islands. Similarly, Indonesia and Australia are also said to be once a single-unit large island. Later on, some parts were submerged by sea water and formed several small islands. Is this theory true?

Despite diferent size, that is kangaroo in Papua are smaller than in Australia, the characteristics of Papua and Australian Kangaroos is basically derived from the same species. Even, kangaroos in Papua are more diverse. 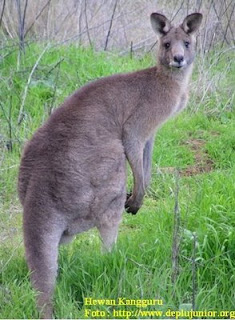 Kangaroo Papua consists of two genera of Dendrolagus (Tree Kangaroos) and thylogale (Land Kangaroo). Tree kangaroos spend most of their life in the tree. However, these animals also often fall to the ground, especially when looking for drinking water. The muzzle of Tree kangaroo is more peaked compared to that f land kangaroo. Its tail is rather long and rounded, bushy from the base to the tail. While front legs of land kangaroo are shorter than the back ones, their claws are even smaller.

Seeing the resemblance of Papua and the Australian Kangaroos, a thought come and support the theory that Indonesia and Australia had once become a single vast land. Will this two big lands be back into unity through the same mission to save kangaroos from extinction?